The 5 Ways the News Industry Will Change

The news industry has and will continue to undergo dramatic changes in terms of the content it provides and the manner in which it provides it. Some trends, such as increases in mobile usage, social media-optimized content, and video, have already been well publicized. However, other trends will also play a major role in shaping the news industry but are not getting as much attention.

News stories are often presented in an isolated fashion with little or no reference to similar events. Consumers would benefit from answers to questions such as “How common is this event?” and “How severe is this event compared to similar events?” I developed a daily tornado tracking analysis that allows me to simply, clearly, and cleanly track U.S. tornado fatalities relative to prior years. Additional metrics are on the way (below is the chart as of June 4, 2013; original post here):

2)      Proprietary metrics to analyze the news

For example, the severity of tornado outbreaks can be difficult for news consumers to assess besides through simplistic measures such as the number of tornadoes.  I am building a proprietary measure called the AW Potential Outbreak Severity Index in order to rank the severity of different tornado outbreaks. For example, which is a more severe outbreak, three EF2 tornadoes, two EF3 tornadoes, or one EF4 tornado? Using an early version of my metric, one EF4 tornado is potentially more severe than two EF3 tornadoes which are potentially more severe than three EF2 tornadoes. The measure is based upon the expected number of fatalities from a given outbreak: 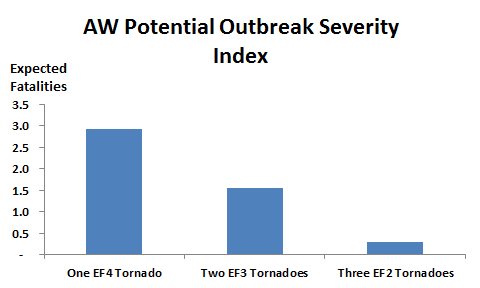 Note: Index will change as additional improvements are made.

I used live affiliate coverage, social media photos, and Google Maps to estimate the length of the section of the I-5 bridge that collapsed in Washington on May 23, 2013. I estimated a length of 160 feet, which turned out to be correct. Many similar exercises, such as estimating length, width, distance, and number of people in a crowd can be performed remotely in a rapid manner.

Additional trends: I am already taking advantage of the three trends listed above. The below trends are not yet available or are beyond the core capabilities of AnalysisWire, but savvy news organizations will be employing these tools in the near future.

Traffic cameras, weather cameras, and other stationary cameras are ubiquitous, but news organizations generally don’t take full advantage of them. Smart news organizations will record these cameras around the clock and collect footage as stories dictate.  Examples include time-lapse video of weather events (already being employed to a limited degree) and showing the shaking caused by earthquakes, even the smaller ones that strike California on a regular basis.

Drones are already thought to be important to the future of news organizations for several obvious reasons:

These and other trends will become more apparent in the coming years.