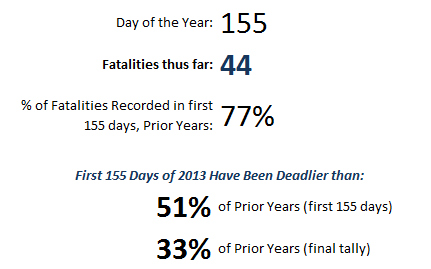 Note:  Prior Years refers to the years 1950 – 2012, the years of the most accurate tornado data.  May 31 tornado fatalities could be increased.  The tally we use is currently 9, which may be too low.  The tally is currently at 19, according to NBC News, but some of these fatalities may be due to flooding rather than tornadoes. The Storm Prediction Center is explicit about using deaths caused only by tornadoes in its data rather than deaths caused by flooding, so we are being cautious in keeping the May 31 death toll at 9 for the time being. Tornado statistics are in beta and are subject to change.

This entry was posted in Tornadoes, Uncategorized, Weather and tagged 2013 Tornado Fatalities, Tornado. Bookmark the permalink.
%d bloggers like this: