Zack Greinke has thrown 180 pitches as a Los Angeles Dodger, but it was his last one that cost the team the most.  After hitting San Diego Padre Carlos Quentin on the arm with a pitch, Quentin charged the mound, resulting in a broken collarbone for Greinke.  The Dodger pitcher, who makes $21 million in 2013, is expected to miss eight weeks, so the injury is particularly costly for the team. 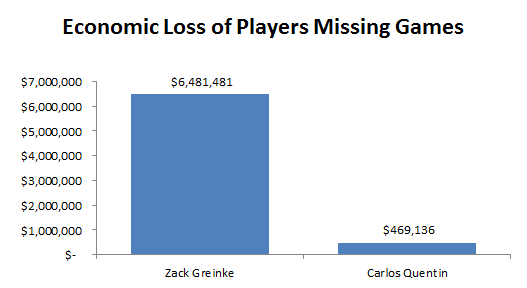 For the effect of the injury on win-above-replacement analysis, see here and here.  Analysis assumes no postseason games.  Other players are ignored, including Jerry Hairston.  Calculations involving the April 11 game missed are ignored.